Signed World Cup football from 1974 in the Krupp Historical Exhibition

Football World Cup 1974 in Germany, half the world is a guest: 25 emotionally charged days 48 years ago – days full of ups and downs. In the end, the Federal Republic of Germany rejoices and becomes World Champion for the second time. The Brazilian national football team, still world champions in 1970, suffers a number of defeats and finishes 4th in this championship.

With the stadiums of FC Schalke 04, Borussia Dortmund and Fortuna Düsseldorf, three cities in the Ruhr region are also represented at the World Cup. The Brazilian national team plays two matches in Gelsenkirchen and Dortmund. Strictly guarded by the Essen police, the team around Zagallo, Rivelino, Peres, Cafu, Edu and Pélé, who will accompany the team and open the World Cup together with Uwe Seeler, is accommodated in the Essen Touring Hotel. The hotel, not far from Villa Hügel, belongs to Fried. Krupp AG, is leased to Hubert Imhoff KG in 1971 and finally demolished in 1986.

The time of the World Cup is unique and impressive. Countless mementos are created. Two of them are now part of the Krupp Historical Archive:

In 2020, the then hotel manager of the Touring Hotel left her private memory album of the time with the Brazilian football players to the archive. Photographs and newspaper clippings, autographs of the players show how the team was received in Essen and the excitement they caused among the citizens of Essen.

Two years later, while cleaning out the basement of a police station in Essen-Rellinghausen, a completely dusty little football turns up. The ball is carefully cleaned and reveals numerous signatures that can be attributed to the Brazilian squad. A sensational find that can be admired in the Krupp Historical Exhibition from Tuesday, 5 April 2022.

You can discover more information about the history of this special football and the souvenir album here. (German only)

Admission to Villa Hügel only with daily negative rapid test

Villa Hügel, the special exhibition 2x KIPPENBERGER and the park remain open.
The Historical Exhibition Krupp cannot be visited for the time being.

Visiting the building and the special exhibition (incl. park).

Access to the main building with the special exhibition can only be granted from 30 March 2021 if the following officially ordered measures are complied with:

Visit to Villa Hügel Park only

Visits to the park only can be made from 30 March 2021 onwards, subject to the following requirements:

Admission to the building cannot be granted in this case. Please note that there are no public toilets available in the Villa Hügel park. If you also wish to visit the building with the special exhibition, you will need a timed ticket for the main building.

We look forward to your visit and thank you for your support!
(subject to change)

As the owner of Villa Hügel, the Alfried Krupp von Bohlen und Halbach Foundation supports the decisions of the Ministry of Culture and Science of North Rhine-Westphalia to close down state-owned cultural institutions in November. Villa Hügel, Historical Exhibition Krupp and Park will not be accessible to all visitors, including annual ticket holders, from 2 November until probably 30 November 2020. By closing the grounds, the Krupp Foundation would like to make another contribution to slowing down the spread of the corona virus and hopes to welcome visitors again soon.

Villa Hügel and Park reopen for visitors on 16 June

After three months of closure, visitors can now visit the Hügelpark and Villa Hügel again from 16 June. The Main House will be opened first. Due to the space situation, the Krupp Historical Exhibition in the Small House will remain closed for the time being.

To protect both visitors and employees, the Alfried Krupp von Bohlen und Halbach Foundation has taken comprehensive hygiene and clearance measures: A compulsory wearing of masks in the building, limiting the number of visitors both in the Main House and in the park, a fixed course to avoid crowds and changed opening hours are a contribution to counteracting the spread of the corona virus. Group visits and guided tours are also not possible for the time being.

For three months Villa Hügel and the park were closed due to the difficult to assess developments around the corona virus. The Krupp Foundation has used the closing time for intensive restoration and rehabilitation measures: Visitors can now admire, for example, the six-part tapestry series from the 17th century on the first floor of the Main House, which now shines in bright colours again after extensive cleaning and conservation.

To compensate annual ticket holders for the three-month closure, all annual tickets purchased before 16 June 2020 remain valid until the end of June 2021.

Coronavirus: Villa Hügel and Park closed for visitors from March 14

As the owner of Villa Hügel, the Alfried Krupp von Bohlen und Halbach Foundation has decided to close the Villa Hügel and its park from March 14, 2020 until further notice. By closing this site, the Krupp Foundation hopes to contribute to slowing down the spread of the corona virus.

All guests and groups who have booked a private tour Group will be informed individually! If you do not receive separate Information from Villa Hügel Visitor Service during the year, the tours will take place as confirmed. In case of cancellations on you part, please note the conditions stated in the booking confirmation.

We hope for your understanding and look Forward to your visit at a later date.

Villa Hügel will be closed from Monday, 23 December 2019 until Monday, 6 January 2020 for general visitor traffic due to repair and cleaning work. The closure concerns both the Main House and the Krupp Historical Exhibition in the Small House of Villa Hügel.

The Villa Hügel Park is open to visitors during the Christmas holidays and daily from 8 a.m. to 8 p.m. during the turn of the year.

Fellings and new plantings in the park of Villa Hügel 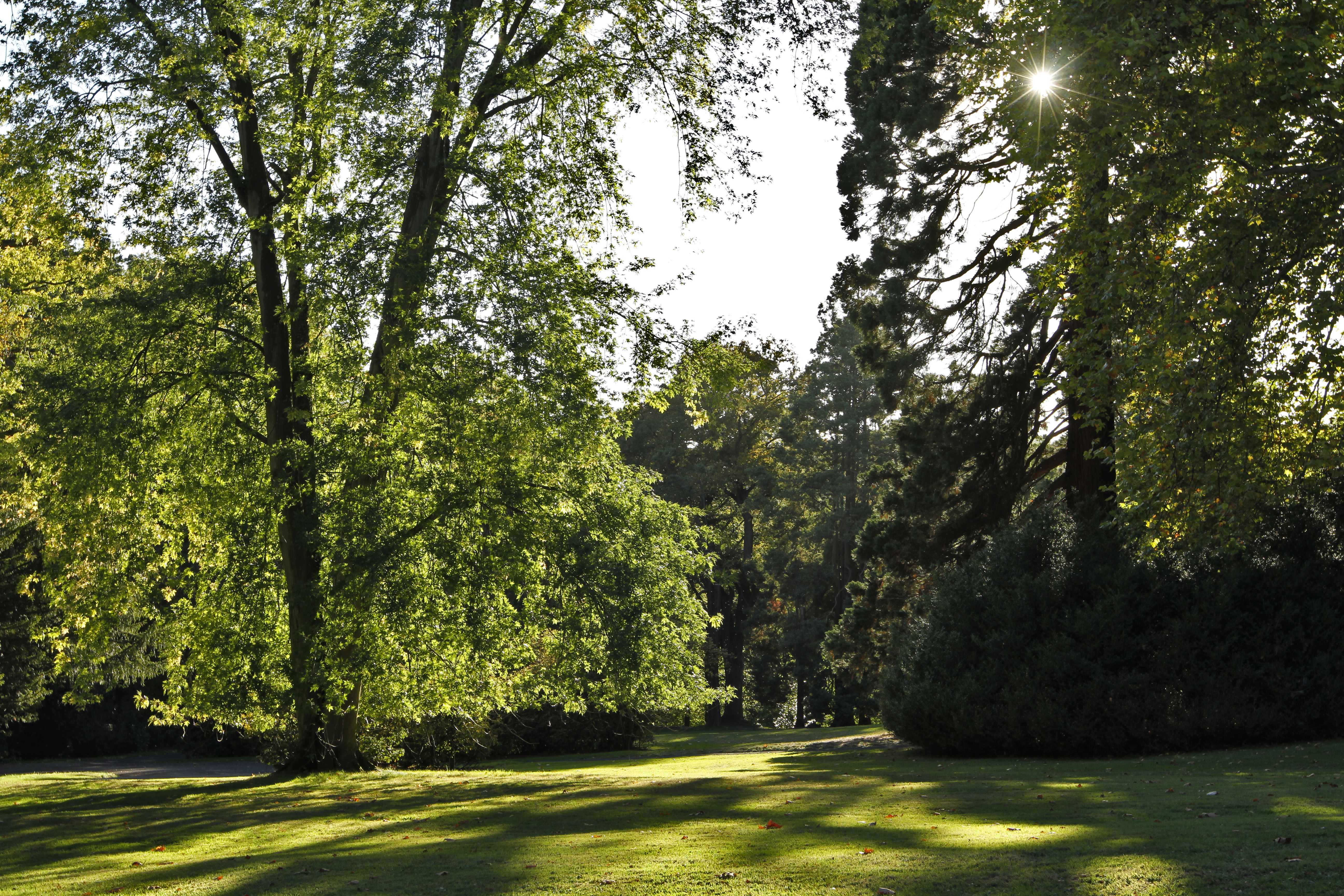 Villa Hügel is surrounded by a 28-hectare park, which the Krupp Foundation preserves for future generations and opens daily from 8 a.m. to 8 p.m. for interested visitors. Many different tree species and plants, such as rhododendrons, beeches, lime trees or horse chestnuts, make up the face of the park. It is a constant challenge for the foundation to ensure the preservation of the plants in view of the ever-increasing influence of environmental factors. In the last two years in particular, the park and its vegetation have been severely affected by drought, storms and pests, so that 57 trees have had to be felled between 2018 and today. To this end, the Foundation planted 68 new trees during this period in the interests of conservation.